A crisp fall day dawned, much like today,
Twenty years ago.
Our day began the usual way;
What was to come, we didn’t know.

To school, to work, to household chores,
We rushed along busily;
Another ordinary day it seemed
With routines and normalcy.

The cowardly terrorists struck that morn;
They hijacked passenger planes,
Destruction and evilness on their minds,
Eager to cause great pain.

They crashed those planes into our towers
And the Pentagon, but when they tried
That fourth attempt, they were
Met with their demise.

To eradicate American liberty,
They sought to crush our soul
But didn’t know who they were dealing with
And failed to achieve their goal.

Disbelief and shock set in
As we witnessed the horror unfold,
Then fear and quickly after that
Our anger took ahold.

We watched the towers collapse inward,
A heap of dust and debris;
Darkness descended all around
And engulfed NYC.

The fire trucks came screaming in
Through the smoky haze; ready to
Rescue the helpless and trapped,
There was so much work to do.

So many brothers and sisters
In this red line family
Gave their lives on this tragic day –
Those courageous 343.

Since then, we’ll never forget
The tragedy, the pain.
The lives we lost, the courage shown,
The world forever changed.

In solemn remembrance,
We teach posterity
So history won’t repeat itself
And we’ll protect our liberty.

A bold red, white, and blue symbol
Flying in the sky
Embodies American freedom and hope,
With terrorists we will never, ever comply.

This day won’t be forgotten,
We must always remember.
What happened that day
On the 11th of September.

These pictures show Ladder 118 of the FDNY crossing the Brooklyn Bridge headed to the World Trade Center. All 6 firefighters aboard were among the 343 firefighters lost that day. We will not forget their efforts and sacrifice. #NeverForget 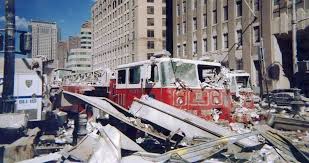