11th – Summer kitchen fire – Hess farm – 1017 S. Market St. This was prior to anyone figuring out that this property was actually in the Borough of Mechanicsburg; all of the buildings are back a long driveway that begins along Market St. in Upper Allen Township

15th – Bomb scare – Mechanicsburg Area Senior High School. At the time, firefighters were called to bomb threats to search lockers and other areas of buildings; firefighters who were fire company members were permitted to assist while all other students waited outside the building.

26th – 234 man hours pumping Webercroft; 24 hours; 7 portable pumps; 1500 GPM civil defense pump; 1400′ 2 1/2 hose. Webercroft flooded on a regular basis; the aforementioned civil defense pump was on its own trailer and was towed in; it pumped water across Market St; eventually, a swale was built that channeled much of the water under Market St and into the open fields of the Hess farm.

30th – Auto accident at the Rts. 15 & 114 construction site. Noted to document the time that the new interchange was being built at Rts. 15 & 114; previously, there was a traffic signal at the intersection, but the building of a safer intersection was prompted by a serious school bus accident in 1975.

23rd – Auto accident on Gettysburg Pike near Fisher Rd. (actual location at 403 Gettysburg Pike); three severe injuries (one being a compound femur fracture with broken glass in the wound); had trouble freeing victim in car and called for rescue truck from Co. 27. However, we got victim out before arrival of the rescue truck.

24th – Wade barn fire, Hogestown Rd. (1/4 mile north of Woods Dr., on the west side of the road). Believed to be the work of an arsonist. We sent E123 because it has most water on board. Pump in service two hours. A firefighter from Co. 31 (Silver Spring Community Fire Company) was later convicted of setting this fire, as well as three other barn fires in the area. Three of the fires were within close proximity of his house. At one of the fires, an assistant chief from Co. 31 was seriously injured from falling debris. Volunteer firefighters were solicited by terrified area farmers to barn sit. The firefighters maintained foot patrol on the farmer’s property at night and armed themselves with weapons such as baseball bats and clubs. The other scenes were Lambs Gap Rd. just north of I- 81; Woods Dr., at the sharp corner 1/2 mile west of Hogestown Rd. (Fritz farm); and Mulberry Dr. just off Woods Dr.

Note on one of the auto accident reports: Flushed gas tank of auto involved in accident. This practice was common in those days; water was flowed into the gasoline fill with the purpose of flushing all of the gasoline from the fuel tank. The thinking was that the fire danger would be lessened with no gasoline in the tank. The gasoline that escaped from the tank was washed down with hoselines. Washing down involved spraying the roadway with a handline to disperse the gasoline either to the side of the road or into storm drains! Many calls were dispatched as wash downs when there was a need to wash gasoline off the roadway.

As mentioned in the February notes, one auto accident report noted. Wash down auto gas and diesel fuel from accident scene.

17th – Township building, 52 Gettysburg Pike (on the northwest corner of Mayfield Rd & Gettysburg Pike). Township fuel pump struck by lightning; well involved with extension. Documents former location of the township building (an old fruit stand); also of interest is that in those days (and for many years afterward) municipalities maintained their own fuel pumps.

25th – Contractor burning trash during construction of Rosegarden Development. Noted to document the time when the Rosegarden development was being built.

30th – Rehab Hospital (4950 Wilson Lane) Upper Allen was included on the initial responses to this building because part of the building was in Upper Allen Township. At the time, Lower Allen ran very few mutual aid companies on anything.

9th – Auto accident – Rt 15 between Lisburn Rd & Grantham Rd. Used two porta-powers; one air chisel; and one bolt cutter. Of note – E323 carried only one porta-power, so the second must have been one that the ambulance carried! 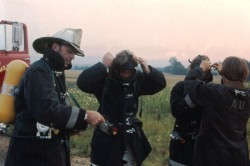 The turnout gear was duck, the helmets were œtin senators, and the gloves orange fireballs (for the most part). Notice the unprotected are (exposed jeans) on the firefighter second from left. The coats had two removable liners. One a vapor barrier, the other a winter liner usually wool. The winter liner was removed in the summer for comfort – both to keep cool and to avoid the scratchiness of the wool on the skin. 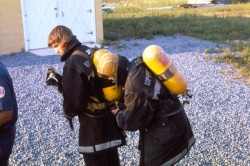 Firefighter Don Waardenburg being assisted by an unknown firefighter. The head gear being worn by the assisting firefighter is believed to be nothing more than a detached helmet liner. Don is wearing one of the Scott SCBA carried in suitcases on E123 (67 Chevy Darley) and E223 (62 Chevy Darley). The company carried a total of seven breathing apparatus at the time. 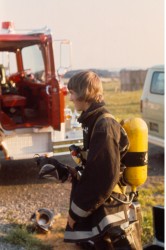 Firefighter Don Waardenburg. Don was probably only 17 years old at the time and was engaging in live smoke training. Note the unprotected areas above his boots. 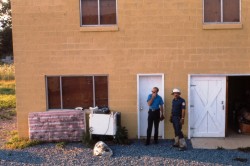 Left – County Fire Training Coordinator Earl Moser (Car 98) and Chief Jim Bender discuss the evening’s activity. The three chiefs at Upper Allen were the only ones with Philly helmets at the time. The two are pictured in front of the smoke house. The smoke house simulated a two story, residential layout. 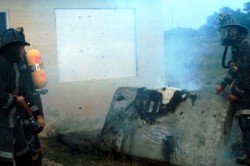 Firefighter Val Paturzo prepares to douse the smoldering mattress with a booster line. 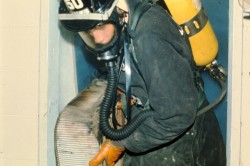 An unknown firefighter dragging a smoldering mattress out the front door of the smoke-charged smoke house. Note the fireball gloves and the unprotected areas around his ears and neck.

16th – Auto accident – Rts 15 & 114. Victim extricated from a car hit by a tractor trailer; 100′ booster line; pry bar; and porta-power. E323 was the only apparatus that responded to auto accidents. Since it didn’t have a booster line, apparently one of the other pieces of apparatus must have responded. 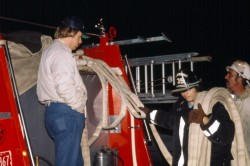 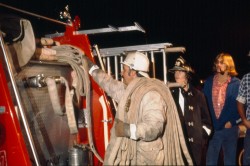 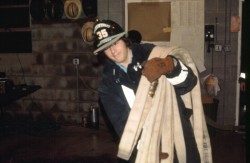 Firefighter Charles “Chuck” Comrey advances the hoseline through the apparatus bay at Station 2 (Gettysburg Pike). The primitive looking surroundings were both the bay for E123 (67 Chevy Darley) and the social area of the fire station. Members would sit on folding chairs along side E123 and socialize. Eventually, both pieces of apparatus were moved to the other side of the station and the pictured side was converted to a more recognizable social area. A bunkroom was eventually added, as well.

30th – 2254 hrs – York Rd., Monaghan Township, Lentz residence (no known relationship to Nancy). “Called to assist Monaghan on house fire. Had partition and loft area fire. Considerable damage done to house. Pumps in service 1 hour, 20 mins.; 50′ 2 1/2″ smoke ejector; portable generator; Circle D lights; 4 breathing masks.” Mutual aid calls were handled by E123 and E223. E323 stayed back to protect the community. E223 handled all transfers at the time. It was not uncommon for companies such as Monaghan to handle first alarms with only one company. However, any report of a structure fire in Monaghan usually resulted in many members of Upper Allen to hightail it to the station in anticipation of being called. 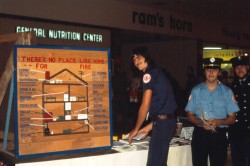 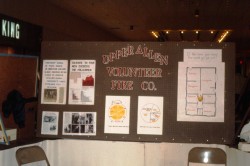 18th – 1438 hrs. “Lady had a pan of eggs on the stove and went next door for awhile and when she returned the house was full of smoke. Smoke damage to clothing and drapes was all there was.

22nd – 0738 hrs. Called to a reported plane down on East Winding Hill Rd. on the Failor Farm (800-900 block, odd side). Police reported the plane made an emergency landing and everything was all right (sic). No equipment responded.

22nd – 2351 hrs. Pick up truck into tree; Grantham Rd. in front of Ashcombe Estate; freed occupants from vehicle; 1 brush and 1 ambulance from Williams Grove. The Ashcombe Estate, also known as the Ashcombe Mansion, is located at 1100 Grantham Rd., just west of Gettysburg Pike. It had a large tree that sat in a cow pasture about ten feet off the roadway on a curve in the road. Many patrons of The Countryside Inn and The Cold Springs Inn ended their trips home prematurely at that tree. Grantham Rd. was an at grade, stop-signed intersection with Rt. 15 at the time. When the tree was finally cut down, a comment was published in the County Fire Coordinator’s newsletter mentioning the loss of call volume for Upper Allen as a result. That site was also notable because being in a cow pasture, we were often “assisted” by curious cows. Their warm breath in the winter was a real bonus!

For many years, Tanker 27 was the primary rural response unit from the Borough of Mechanicsburg. While Company 28 had a rural engine, their response area was limited. By this time however, Co 27 did have a rural engine so it’s unknown why it would not have been on this call. Perhaps it was committed, or out of service, or maybe the box assignment only called for the tanker?????

17th – 0003 hrs. Called to an accident with injuries reported by a citizens band radio. Smack dab in the middle of the CB, or citizens band radio craze. CBs, when used constructively, were a great asset to the reporting of incidents, especially along highways. Unfortunately, they were unable to be traced or verified, so CBs were also an outlet for pranksters to call in false alarms.

31st – 0800 hrs. Plantation Inn, 325 E Winding Hill Rd. Fire originated in a sandwich oven located in the coffee shop. Minor smoke damage to coffee shop and adjoining storage room. Believed sandwich oven caught fire because someone placed plastic tray inside oven and turned it on. The Plantation Inn, later known as The Best Western Plantation Inn, is now located at 381 Cumberland Parkway, having to change its address as the result of the new Rt. 15 and Winding Hill Rd. interchange. At one time, The Plantation included a 9-hole, par three golf course (pitch and putt) located where Cracker Barrel and the Wingate Inn now stand.