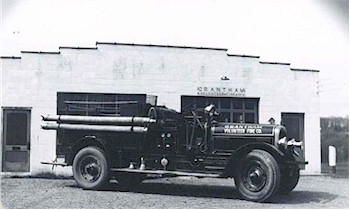 In 1942, in the spirit of civil defense, the residents of the Village of Grantham formed the first fire department – calling it The Grantham Volunteer Fire Co.

By 1949 the company had two used fire engines and a community hall. The company was soon providing service in surrounding Upper Allen Township, so the company changed its name to The Upper Allen Fire Company of Grantham.

In the sixties, the company opened a second station on Gettysburg Pike and dropped the reference to Grantham from its name.

In 1983, fire destroyed the Gettysburg Pike Station. In what was to become a true phoenix from the ashes, the members rallied and combined into one central station on the township facilities campus, and on June 22, 1985, began doing business as the Upper Allen Fire Department.

Incident reports were compiled to share the fire company’s activity for the month. The report numbers, as well as any pertinent information related to specific incidents, were read at fire company meetings. The full reports were also submitted to the township and archived.

The reports have been reviewed, and certain incidents have been selected for inclusion on the fire department’s history page. The reasons for inclusion vary. As the historian, I tried to include any major or unusual incidents, but I also wanted to add a historical perspective, so some incidents are included simply because they refer to some snapshot in history, or include a noteworthy or interesting story that may be of interest to the reader.

You will find some references to other companies/departments. They are included to add historical perspective, not to belittle or criticize. No offense is intended.